Santiam Excursion Trains welcomes you to the most exciting adventure in train tours and events throughout the Lebanon, Oregon area. Enjoy a variety of thrilling and fun rides, both for adults and children. Enjoy the scenic Willamette Valley by riding with us. 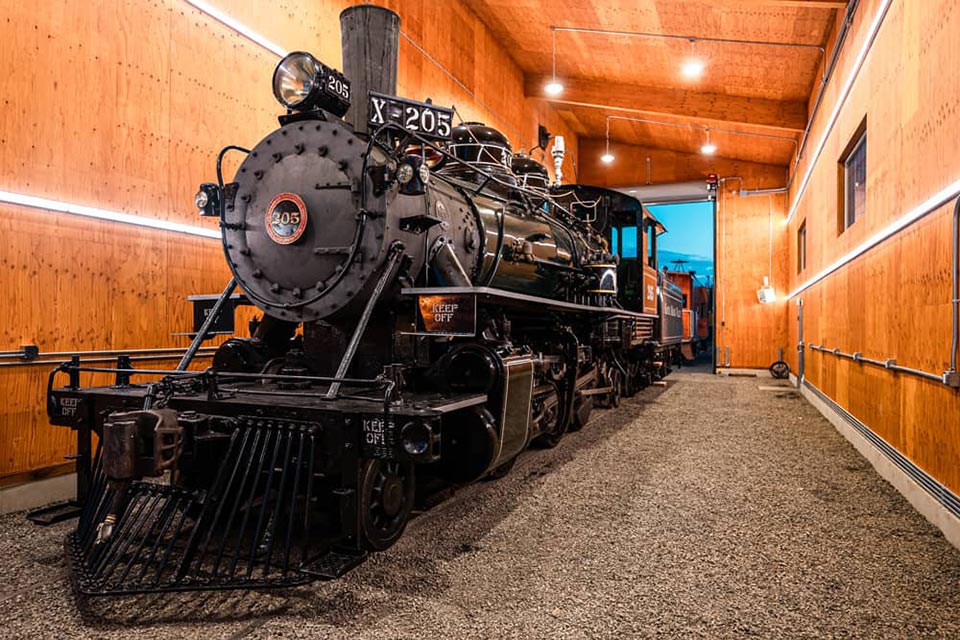 Engine 205 was built in 1924 by the Baldwin Locomotive Works of Philadelphia, Pennsylvania for the San Joaquin and Eastern Railroad and used by the railroad until it shut down in 1933. Following the closure of the SJ&E the locomotive was sold to the Santa Maria Valley RR and moved to Santa Maria, CA.  The 205 operated on the SMV until 1950 when it was donated to the city of Santa Maria and placed on display in 1950.

In 1983 the 205 was sold to George Lavacot and moved to Independence. OR. where the restoration of the locomotive began.  George and a group of friends met regularly over the following 38 years to bring 205 back to life.  During the restoration one of George’s good friends, who was a member of the team maintaining the SP 4449 and was enamored by large mainline locomotive, commented that the 205 was nothing but a “Baldwin pig of a locomotive”, commenting on her humble beginnings and slightly obscure use by shortline railroads in California.  Following this comment, the name “Porky” was given to the locomotive and the pig theme stuck throughout the restoration.  Sometimes you will see a pig mascot hanging out and riding on the headlight of the locomotive.

In 2021 following the successful restoration of the engine George sold the engine to the Albany and Eastern Railroad where a good home could be provided, and the locomotive would be operated in a way that would allow it to be seen by the public.  SMV 205 is used by AERC on select weekends throughout the year. 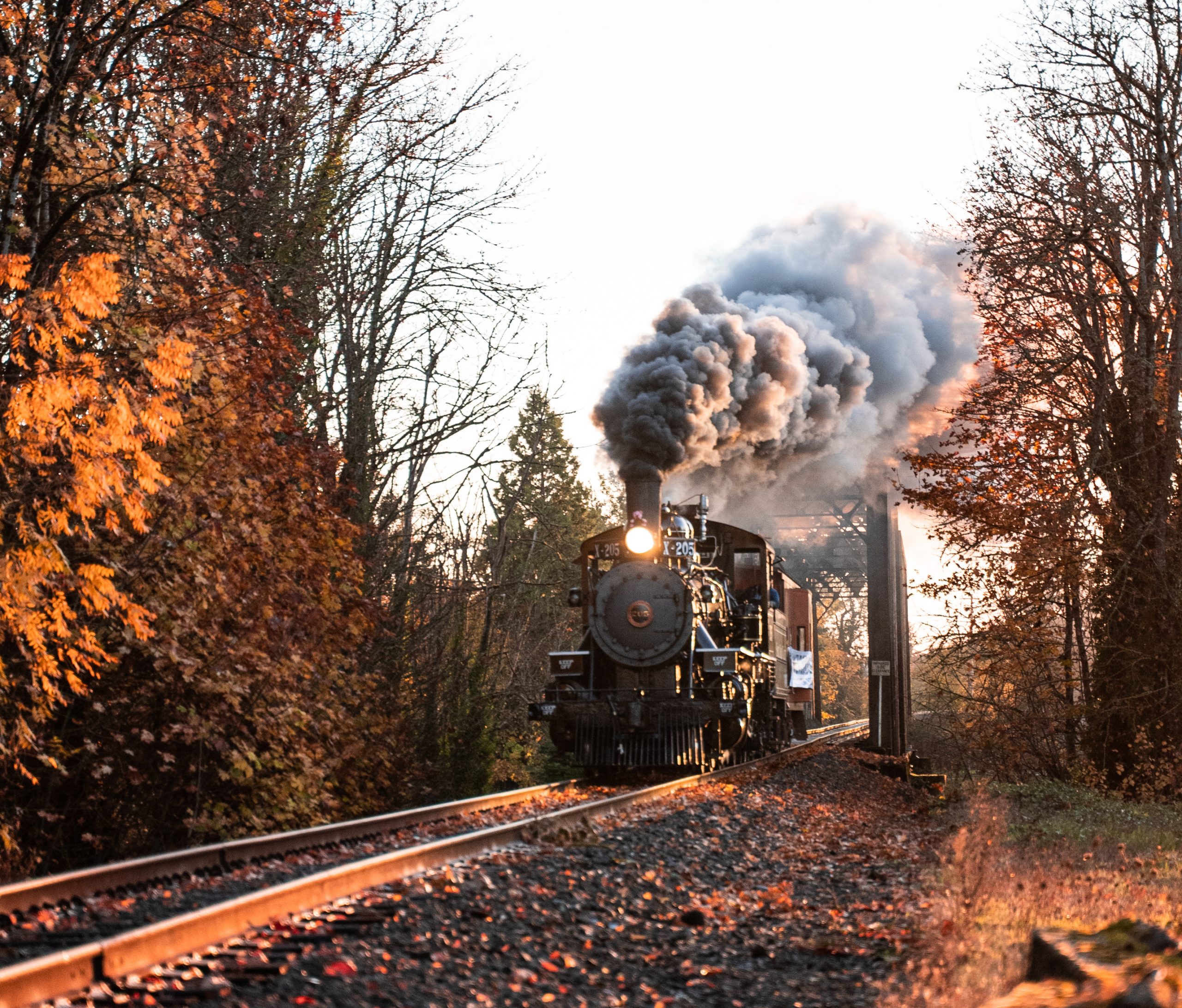 What Our Riders
Are Saying

“I like trains. I like their rhythm, and I like the freedom of being suspended between two places, all anxieties of purpose taken care of: for this moment I know where I am going.” 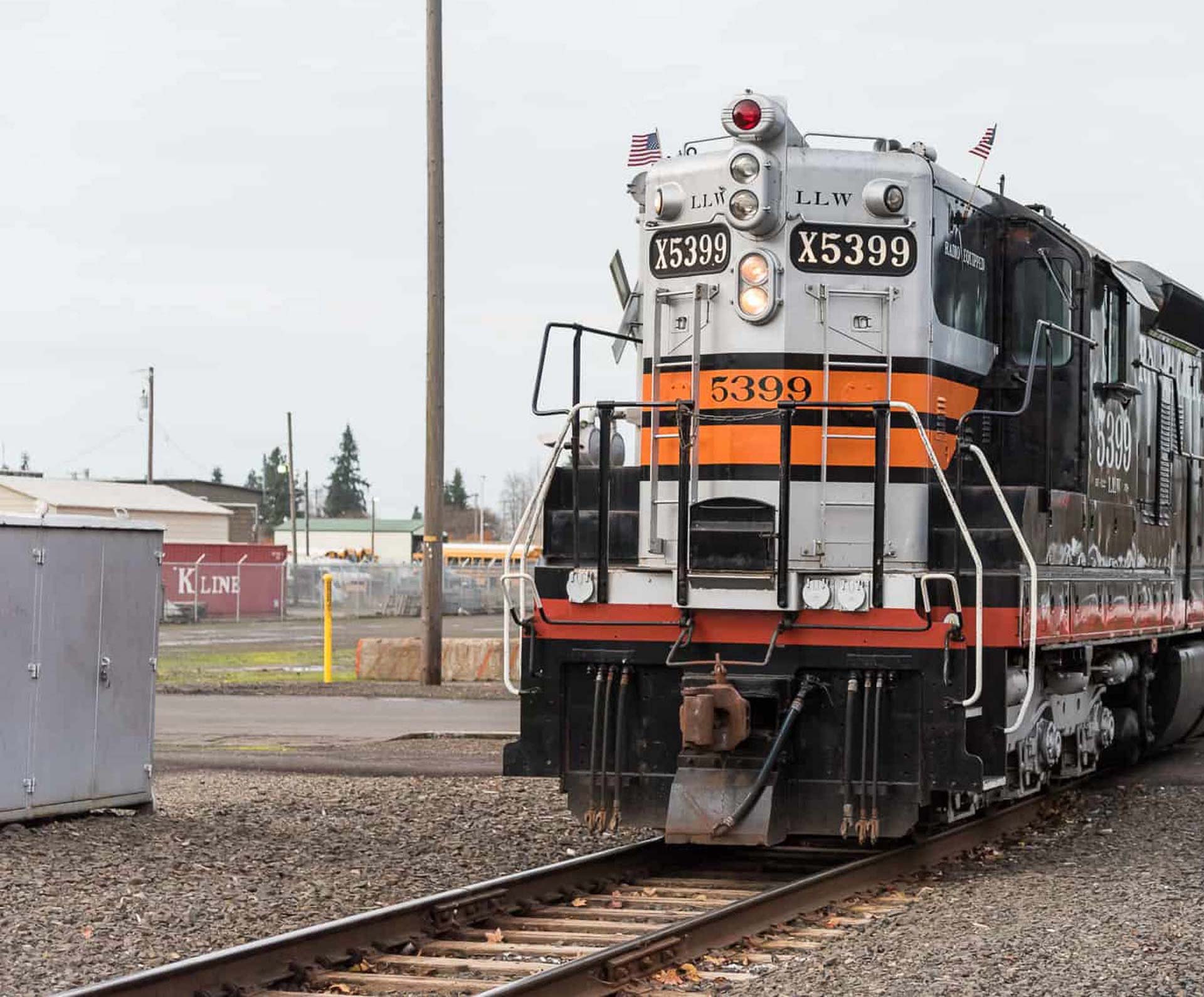 Most of the excursion trains operated by Santiam Excursions are powered by diesel electric locomotive owned by the Albany and Eastern Railroad (AERC).  One of the most notable engines is the former Southern Pacific Railroad 5399. 5399 was built in 1955 by the Electro Motive Division, EMD, of the General Motors corporation under the model designation SD9.  This locomotive was operated by the Southern Pacific Railroad until the 1990s when it was sold into private ownership.  In the early 2000s the locomotive was cleaned up and repainted into its original Southern Pacific livery, the famed Black Widow paint scheme.  Sold to the Albany and Eastern the locomotive has been used in freight and passenger service.

Other EMD diesel locomotives that may be seen are the AERC 1750, 1866 and 2501.  AERC 1750 is a former Southern Pacific locomotive classified as a GP9.  1750 was repainted in to an orange and black livery to show support for the owner’s alma mater Oregon State University.  AERC 1866 is an EMD SW9 purchased in 2020.  Originally built for the Pittsburgh and Shawmut railroad of western Pennsylvania 1866 was repainted in 2021 to it 1976 centennial inspired colors of Red, White, and Blue.  AERC 2501 was one of the first locomotive purchased by the AERC.  It is a model GP35 and regularly operates trains on the line to Mill City, OR.

Additionally AERC’s regular freight locomotives may be used on the excursion trains.  These are locomotive built by General Electric in the late 1980s, from the Dash 8 line of locomotive. You may see the four axle models numbered 5931, 5935, 5957, 1807, and 1841, or the six axle 9252. These 4000 HP locomotives have proven their worth on the AERC operating the majority of the freight trains on the railroad. 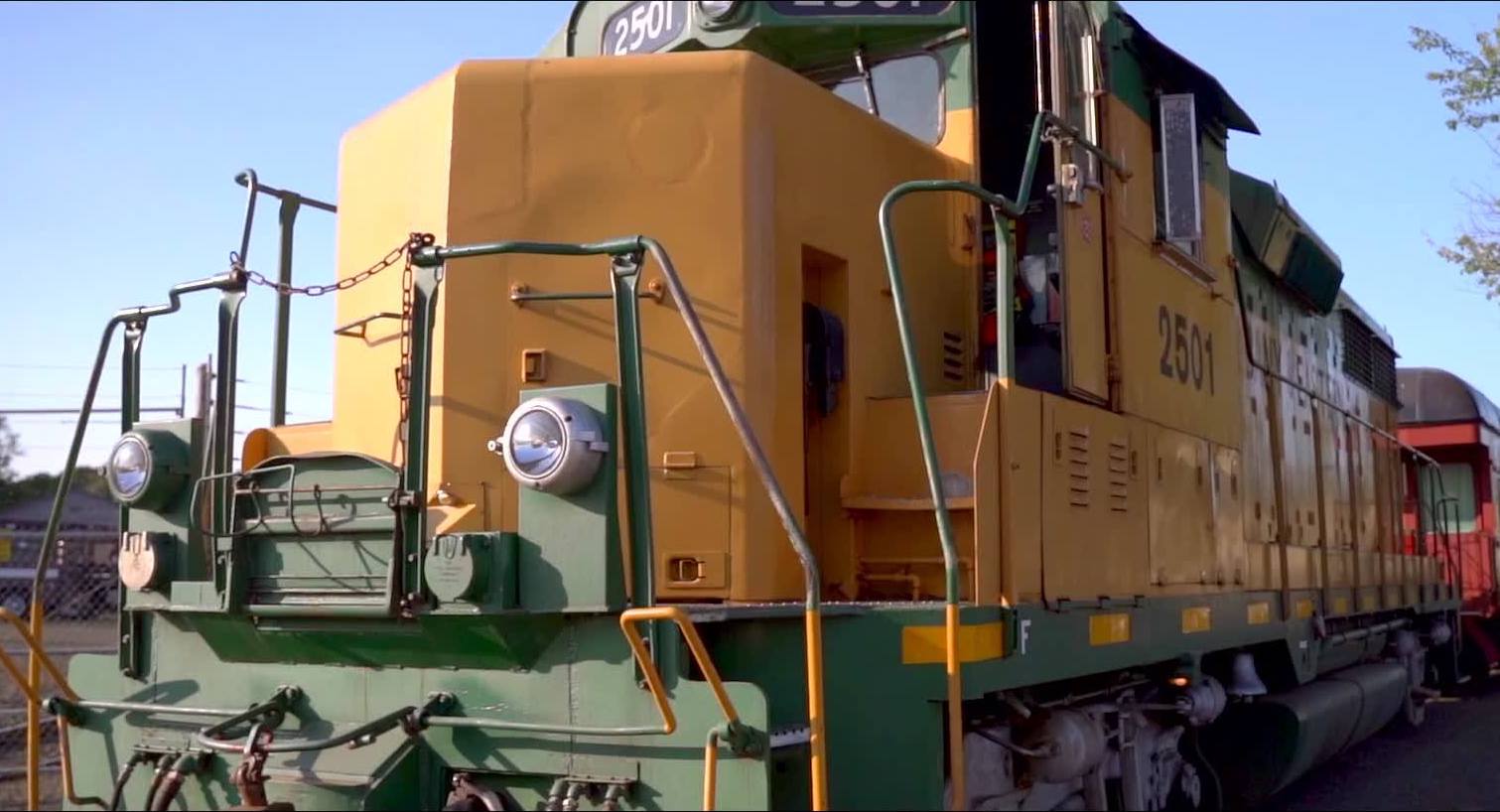 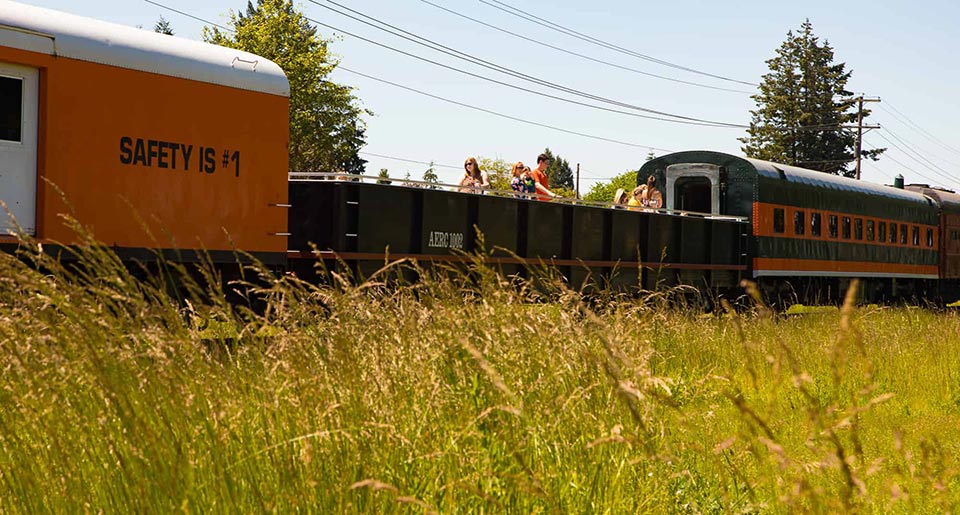 AERC has reconstructed two flat cars, once used as idler cars to haul large pieces of heavy equipment. With benches and railings the passengers on these cars will enjoy the outdoor ride. With room to stand or sit the passengers will get to experience “riding the rail” on this breathtaking journey. The Open Top Cars are a year round favorite. Whether you are riding in July or December you will not regret taking a moment and enjoying the fresh air.

The Albany and Eastern 1099 passenger car was built in 1947 by the famous Pullman Co. It is one of eleven cars built as lot number 6812 and plan number 7485. Originally a 56 seat coach car with an 8 seat smoking section on one end. The car was built new for the Chicago and Northwestern Railroad as CNW 841. It was sold to the Great Northern Railroad and renumbered GN 1099. It has been stored with AERC for many years until we purchased it from private hands. Car 1099 was restored by the AERC and the smoking section was modified into a snack and drink bar.  The main seating section was left open which allows the railroad use the space as needed by each excursion, usually having tables for diners to sit and enjoy a meal. 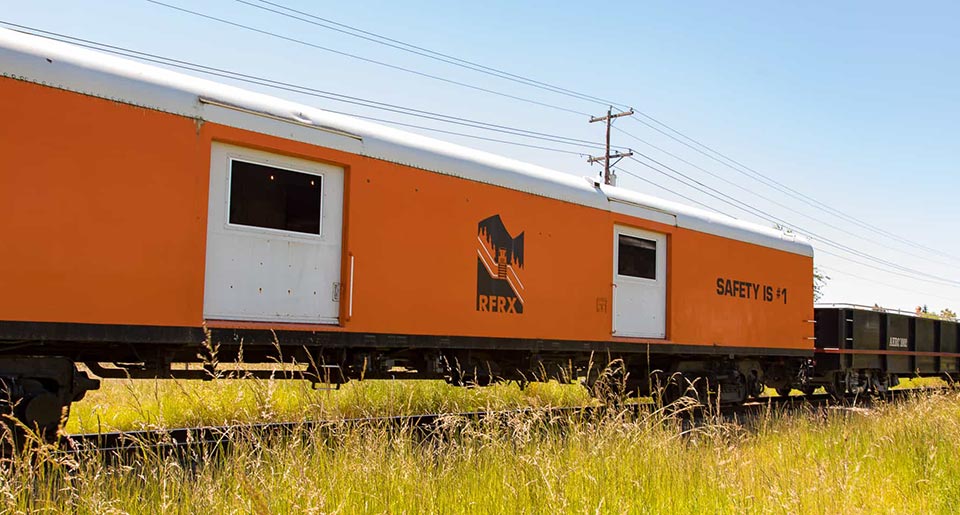 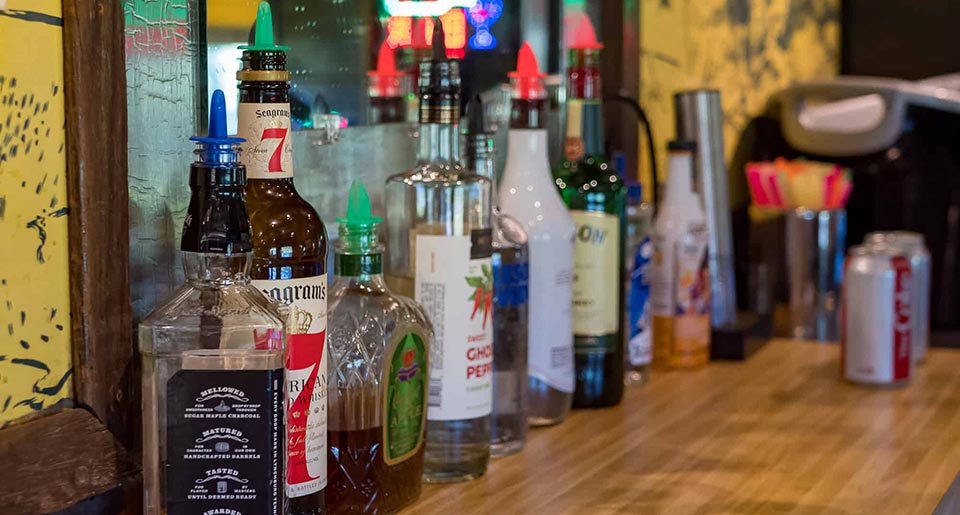 Great Northern Railroad 1241 “Running Crane Lake.” This “Ranch Car” built in 1951 by American Railcar & Foundry is one of six originally in operation. These cars were operated on the Great Northern Railroad’s premier passenger trains, the Empire Builder and Western Star, between Chicago and Seattle. The wood panels, cedar beams, and branding irons contribute to the western décor that can be found in the details of this car. Behind the bar you can see the Eggenhoffer mural that is boasted in all six cars. Even though the “Ranch Car” was built for coach passengers its’ design details make it truly outstanding. The AERC fondly refers to this car as “The Bar Car”. Beverages, cocktails, appetizers, dinners and other snacks will be served from this car. The Bar Car is the heart of Santiam Excursion Trains. We can seat and serve 30-40 guests comfortably.

Built in 1951, RFRX 1003 and was used as a postal storage car at a time when most of the mail traveled by train. This car was built for the Union Pacific Railroad as car number 5743.  The car still maintains most of its original look. It has sliding doors to easily load and unload passengers safely on our excursion trips. The wide open area and view windows provide an open air feeling. This allows passengers to sit or stand and enjoy the beautiful views as you travel along the Santiam River. On select excursions this car will host an arts and crafts station as well as a space for kids to watch an appropriately themed movie. During some dinner service rides you will also find seating and a buffet served here. The Baggage Car can seat and serve up to 40 guests comfortably. 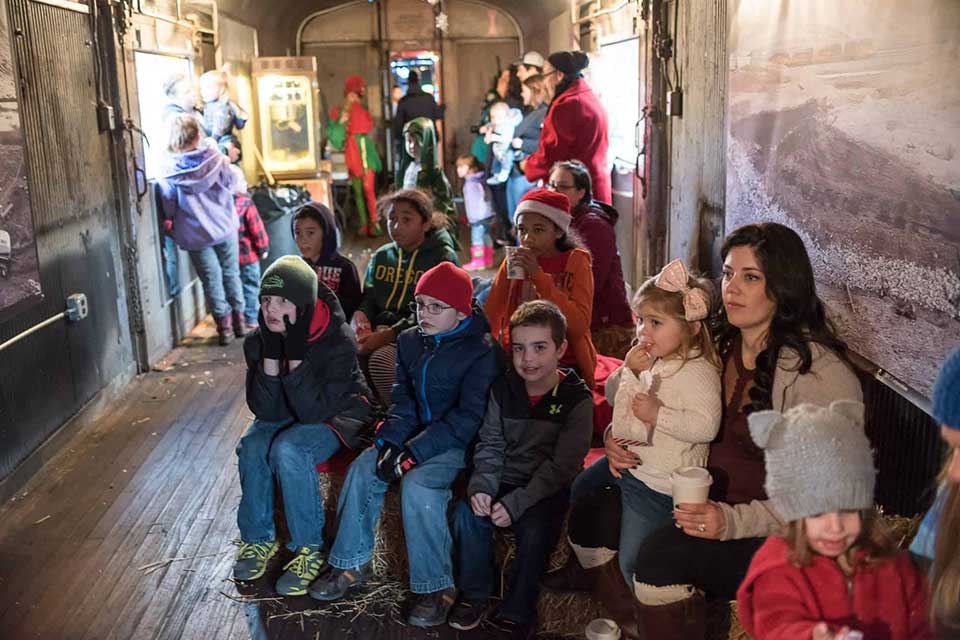 What People Are Saying

Lots of fun. The steam train was awesome. I just wish the ride had been a little longer. But it was great. Everyone watching the train waves. The locals honk, it’s loads of fun and a lesson in bygone history. They do veterans discounts too!

This train trip was 2 1/2 hours long and it was lots of fun. We took the Sunday brunch train that departed 10am. Coffee and breakfast was included and bar drinks were extra. Overall we had a great time. I would recommend it to anyone.

This was fun. Fantastic Bloody Marys. The brunch was very good with plenty to eat. The dining and bar cars are really nice. It was fun having two open cars to view the countryside. Everything was clean and the other passengers were friendly and polite. 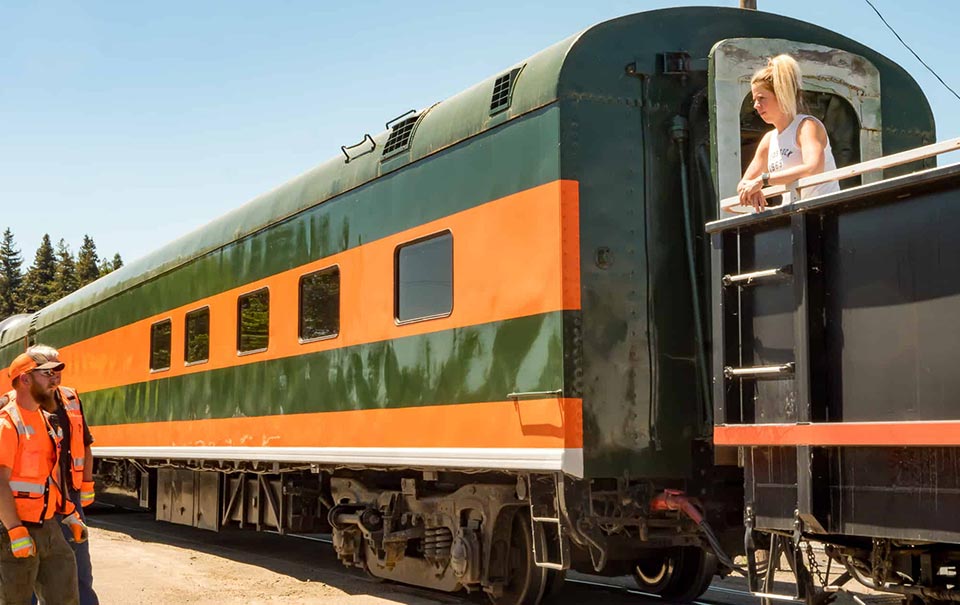 SP 4716 a 1980 caboose, was refurbished to offer exclusivity for any small group. With an inside small personal bar, an outside deck and a private restroom this ride would be perfect for any rail enthusiast or the small group party! Ask us about renting it for your next excursion.